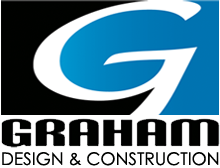 Graham Design & Construction Ltd. is is a local family business that has both the stability of six decades of quality work and the confidence/commitment of another generation to take the company through the next 40 years. We cover the full spectrum of development services, from site selection, design and planning, to construction and property management. Sound Lifestyles Ltd. is the most recent addition to  Graham Design & Construction. We set up Sound Lifestyles to develop multi-residential housing and lifestyle management services that are specifically designed for the retirement community.

The History Of Graham Design & Contruction

Great grandfather, William Hicks started his construction business in 1910 and it was his influence that drew his son-in-law, Clarence Graham, into the construction trade. In 1956, Clarence started his own general construction company, which was very successful and grew rapidly. As opportunities developed he incorporated Clarence H. Graham Holdings in 1965, specifically to develop a 35-lot residential sub-division along Georgian Bay. This development is just south of what is now known as Cobble Beach. Since then, the company has developed numerous lands, currently owns two commercial rental properties, and also owns residential land in the Owen Sound area.

The 3rd generation and design element of the construction business was added when Clarence’s son, Richard, joined him in 1972. After gaining work experience elsewhere, 3 of Richard’s children joined the team. Todd joined in 2011, Marc joined in 2013, and Katie joined in 2014. All three are dedicated to professionalism, bring new knowledge to the business, and will ensure the longevity of the company for the future.